Nobody Puts Baby in a Corner

Lottie turned 5-months old a few weeks ago, which is rude awakening as I’m still no closer to losing the baby weight, but an exciting milestone in that she can start eating some solids. This makes her my current favorite child to feed, because she eats 100% vegetables and fruits and gobbles up everything I give her. When it was Evelyn, I remember smugly thinking “My child is the best eater. I win parenting. This will last.”

It will not last.

So I’m soaking it in while I can, while the broccoli and the blueberries soak into bib after bib that I no longer care about staining.

So many things have changed between my first and my third. When Evelyn was a toddler, I refused to put this toy away until all the pegs were accounted for AND no peg of the same color was touching another.

Now half the time I can’t even find more than a few of the pegs and I could care less about two red pegs touching and it never gets put away because there’s no place to put it.

There also seems to be no place to put Lottie.

She’s so quiet that wherever I do put her, I’m apt to forget about her. Last week I was halfway down the driveway before I realized that she was still in her carseat on top of the dining room table, where I’d set her while I got the older two wrangled into the car. When I sprinted back inside to get her, she was just sitting there giggling at the chandelier.

If she’s not happily accepting being ignored, she’s falling asleep wherever she’s been set down.

She’s also wearing the same pajamas in most of these pictures because she only gets changed when there’s a severe spit up or blowout situation.

When Evelyn was this age, she got a nightly bath in which she was lathered in Lavender scented suds while calming essential oils were diffused in the room and Enya was piped into her little ears.

I 100% do not remember the last time Lottie has had a bath. I do know that whenever it was, I laid her on my knees and washed only her hair over the bathtub that her older siblings were already playing in. The part of her body that directly touches fecal matter gets cleaned several times a day with a baby wipe, and the rest of her body should be good until puberty. In fact she may not get another actual bath until she can get in and out of the tub independently.

Ditto for joining the family for any activity. She’ll be included when she can get there on her own. For now the poor girl just gets put wherever there’s a spot for her.

Here she is in the corner while the rest of us enjoyed a meal:

Here she is as a baby (before she could roll of course) still in the snowsuit she wore 87% of the time and sound asleep on the guest bed. 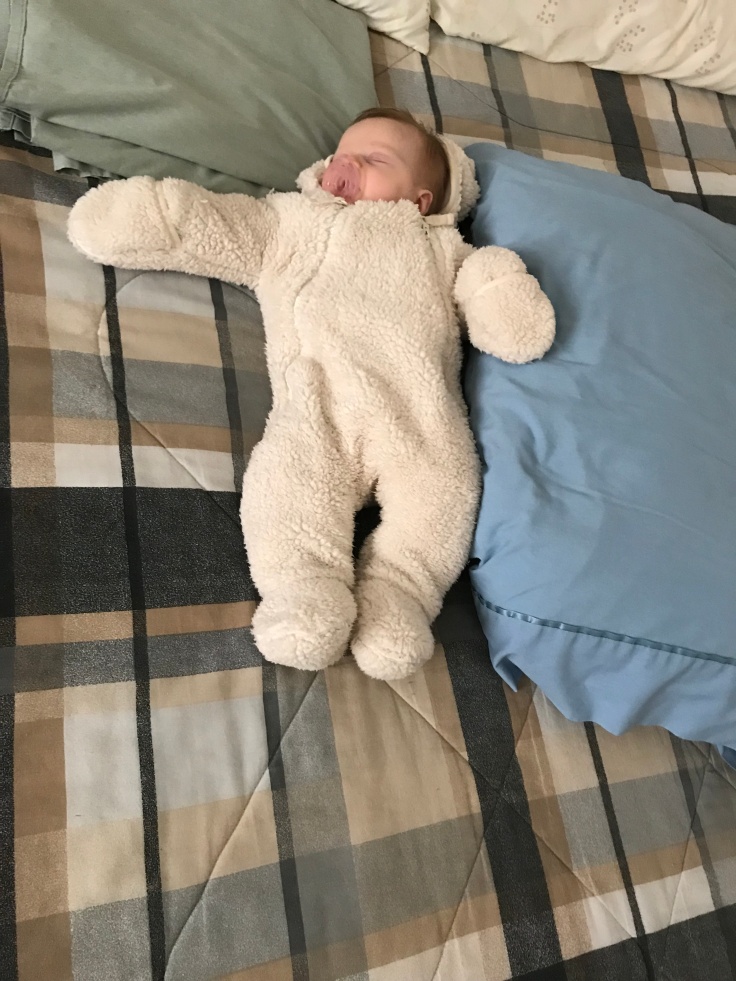 Here she is in a shopping cart, pissed about the fact that she’s being buried in frozen goods and dairy products.

Here she is on the floor of a public pool … 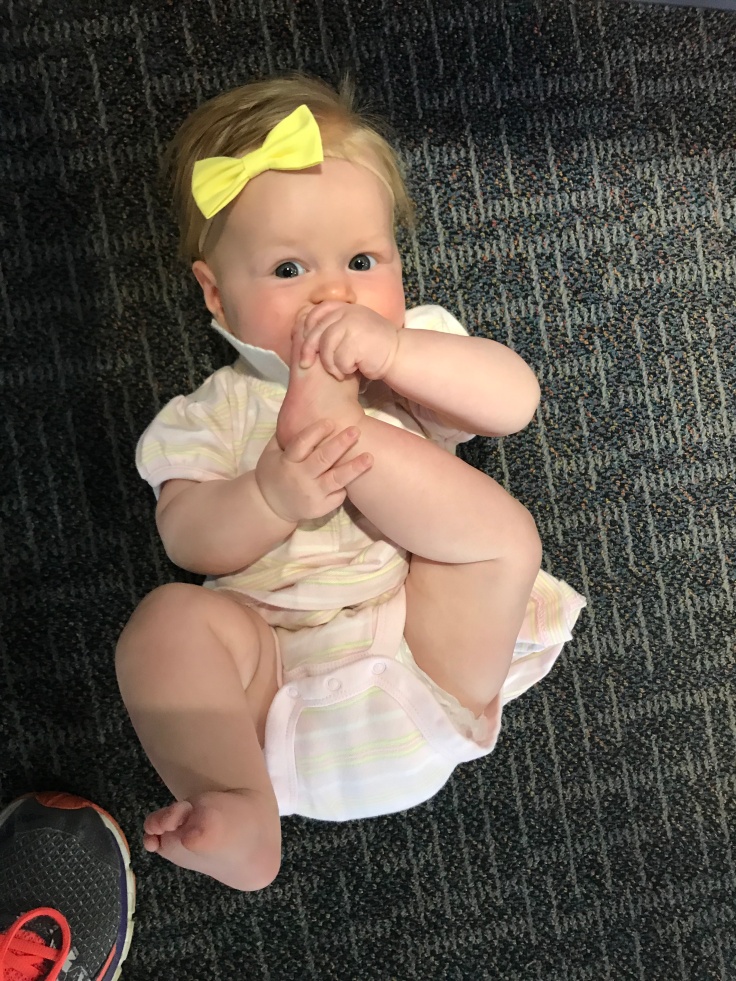 If that was a first baby, there would have been at the very least two different blankets underneath her so that no inch of public floor touched the baby skin that she’s now shoving into her mouth.

And here she is in an Easter basket, because I could, and she was too little to protest.

For her part she doesn’t seem to care where we put her, and the only time she melts down it’s because she’s hungry — and when that happens, immediately is not soon enough.

This was an issue for me on Saturday morning, when we were already late trying to get out the door and I had Lottie and Evelyn downstairs and ready but still needed to go up and get Alex out of bed and dressed … but Lottie was hungry NOW. Problem solver that I am, I put Lottie in her Boppy and asked Evelyn if she’d just hold the bottle in her mouth while I quick ran upstairs.

I was halfway through getting Alex dressed when I heard the pitter-patter of Ev’s feet running through a room that was definitely not the room I’d left her in.

“Ev!” I called. “It doesn’t sound like you’re feeding Lottie!”

“I took care of it!” she called back, and to her credit I didn’t hear Lottie crying, though I still didn’t have much faith in the situation. So with Alex half dressed I threw him under one arm and ran back downstairs to find this: 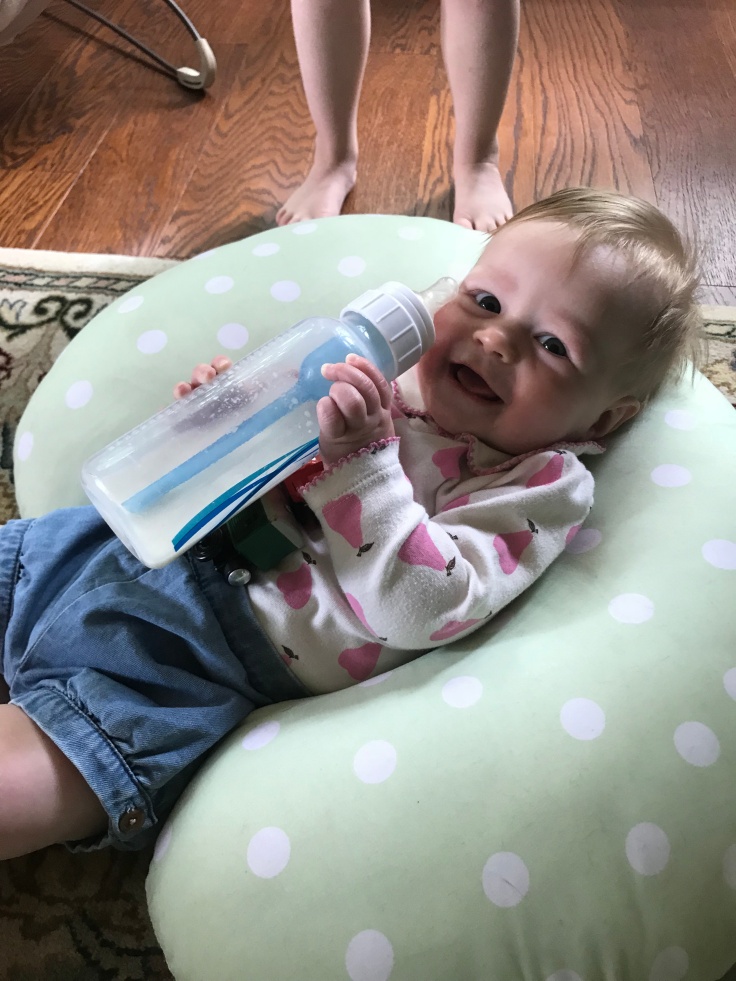 You might not notice them at first, but Evelyn’s shoved two toy trains between Lottie and the bottle, to prop it up for her.

And it seems that Evelyn took her newfound role of helper seriously, because today while I was upstairs putting Lottie down for a nap, I heard her yell:

“Mom! Bring a wipe down with you, I’m changing Alex’s diaper.”

So once again I was running down the stairs with a half-dressed kid under my arm  to walk in on this scene:

I’m thankful I got there before she got his diaper off, as it was a definite code brown situation.

I’m also thankful that Lottie’s finally big enough to sit in the circle of neglect that is her exer-saucer, as well as her Bumbo, because thanks to our oldest and furriest child, laying her down on the floor without some sort of apparatus around her is not an option, as evident in this picture that I like to call “find the baby”: 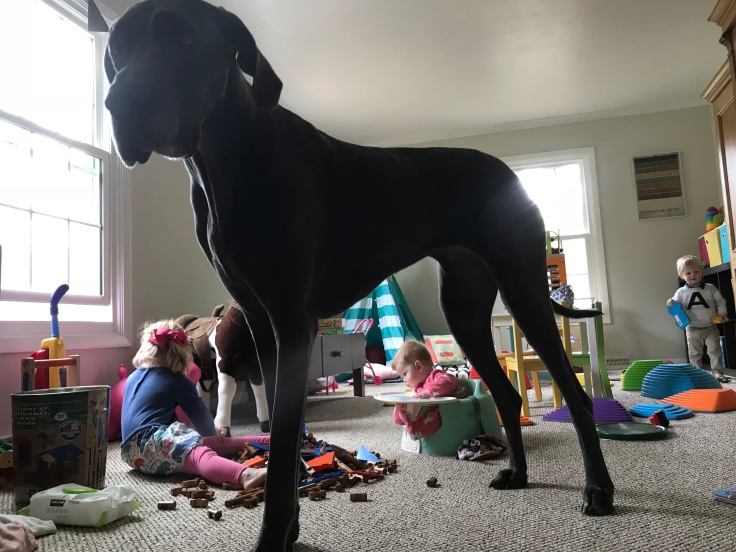 This blog post really should have been titled “Which picture of my neglected child is your favorite” — but it all serves to prove the point that there is just no good place to put the third baby.

Either that, or any place is a good place to put a third baby, depending on how you look at it. I’ll have to ask Lottie when she’s a little older.