Yesterday was a special kind of frazzled, with a trip to the gym, a big grocery run, Home Depot and a dance recital dress rehearsal squished into our regularly scheduled swim lessons and speech, each one inconveniently located at least 25 minutes from the next.

The official start of summer break means that all three kids come along with me for these shenanigans, which I always thought I handled with grace and composure, until three different people at Costco stopped me and asked if I needed some help. This coupled nicely with everyone else at Costco making some sort of comment about how I had no room in the cart for merchandise, which believe it or not I had become aware of without their help, as I piled a bag of broccoli florets and lemons on top of Lottie.

They’re right though about the lack of space, as you can see in the Home Depot selfie that we took for Sweet Baby Ray so he knew we’d visited his favorite place without him.

The official start of summer also means that we will soon be frequenting the one place I despise more than anything else on earth — The Playground.

When whoever designed the first playground sat down to do so, I believe he started by saying “how can we combine Melissa Berg’s two greatest fears?” (And I say ‘he’ because no Mother would build a structure for toddlers with a gaping ledge at the top of a two-story rock wall).

My fear of heights is relatively well managed because I avoid heights like the plague. Not all heights — I can be in a skyscraper and not flinch when I feel it shift with the wind — but put me more than a few feet off the ground with no railing and I’m as jumpy as a virgin at a prison rodeo, to quote Blanche Devereaux.

My kids have some wonderful qualities that I admire, but coordination is not among them. Their legs have been known to give out from underneath them for no reason at all. Today Evelyn was just standing in the kitchen talking to me when her knees buckled and she went down in a heap of princess dress and tears.

Meanwhile Alex has picked up the habit of craning his head as far around as he can get it and staring back at me as he runs full speed ahead, usually into a wall, doorframe or tabletop.

Neither  is a tendency that you want in a child who’s running across a play structure 15 feet off the ground with the sole intent of catching up to his sibling and tackling her.

Of course, every playground has a designated toddler area. This would be fantastic except that ALWAYS right next to the toddler apparatus some a-hole has gone and built a 12-year-old-only playground that is so entirely enticing to young children that they might as well have dipped it in rainbow sprinkles and surrounded it with free puppies and filled the sandbox with Dum Dums.

So you spend at least 15 minutes of your allotted 30 minutes of park time explaining on repeat to your two-year-old why two-year-olds aren’t allowed on slides with no sides and rope walls that even a chimpanzee would struggle with.

And then there’s the fact that you absolutely cannot escape being a helicopter Mom at the playground. And not just with your kid.

Last week we spent our whole walk to the playground reviewing (my) playground rules, at the top of which is “no climbing up the slide.”

Then we arrive at the park to a scene like this: 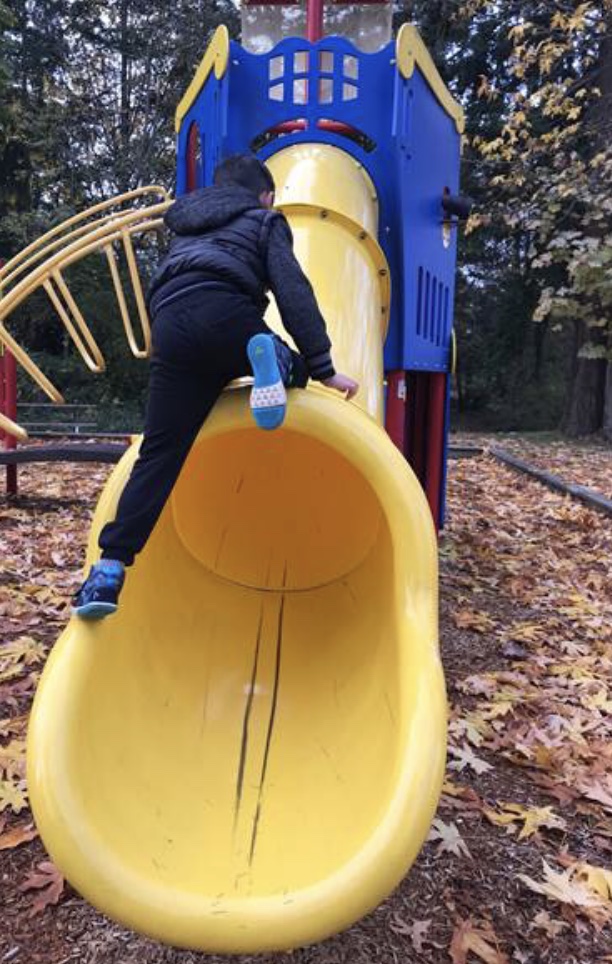 It’s not that I don’t think slide climbing would be a good way to hone the gross motor skills that my kids lack … it’s that the minute they start to scale the slide, a kid appears at the top who wants to descend it as intended. Then I have a choice to either ignore what’s going on and see if they can work it out for themselves, which makes me a jerk of a parent, or hover and/or bark commands from across the playground, which also makes me a jerk of a parent.

This continues when I have to tell Random Kid A that he cannot throw woodchips at my baby and Random Kid B that he cannot pull down my daughter’s shorts and Random Kid C to please not push my son from behind as he’s trying to get back down the stairs because he’s changed his mind (thank God) about attempting the slide from Hell. Random Kids A, B, and C. These are the credits in the movie called “Why Is Every Other Child at the Playground Unsupervised?”, starring me.

The other playground options are equally unappealing, as my children cannot seem to grasp the concept of not walking directly in front of moving swings, and for some reason there are always 100 lb. 15 year-olds on these swings. I can get on board with the sandbox, despite my hatred of cleaning sand out of everything for the next 140 days, but the sandbox always seems to be on the other side of the 12-year-old-only playground and thus we’re forced into another 15 minutes of explanations.

So that’s fear #1, wrapped up into a not-so-pithy explanation. Fear #2   is bees, which there is never a shortage of at the playground thanks to all the wood chips and sticky little hands covered in juice and sugar.

My fear of bees is substantial and all consuming and I’m 110% aware that they can smell this and so they seek me out. I’ve been known to turn over patio tables in my quest to escape a bee … in fact a bee is probably the one thing that could make me forget my fear of heights, as there’s literally no height I wouldn’t go to to escape one.

See this scratch in the side of our playset?

That’s the remnants of a power washing gone bad, as I was mid power-wash when a bee started chasing me and I let the hose get away from me. This thing wraps around the play set like a crazy straw.

I blame My Girl, really, for this fear. That movie funeral absolutely gutted me and I have despised both mood rings and bees every since.

But on the bright side, it gets us out of the car, where we’ve seemed to reach an unspoken agreement that we will be listening to A Million Dreams on repeat until further notice. While I’ll be thankful for a break from that, A Million Nightmares will be keeping me awake until my kids develop some better coordination or the weather turns cold, whichever comes first.