Ho Ho Hold on a sec…

Every year I involve myself in a little gamble called “How early can I put up a real tree and expect it to live through Christmas morning.”

These were my stairway greens last year on November 25h. They were in a pile of brown needles by December 12th. 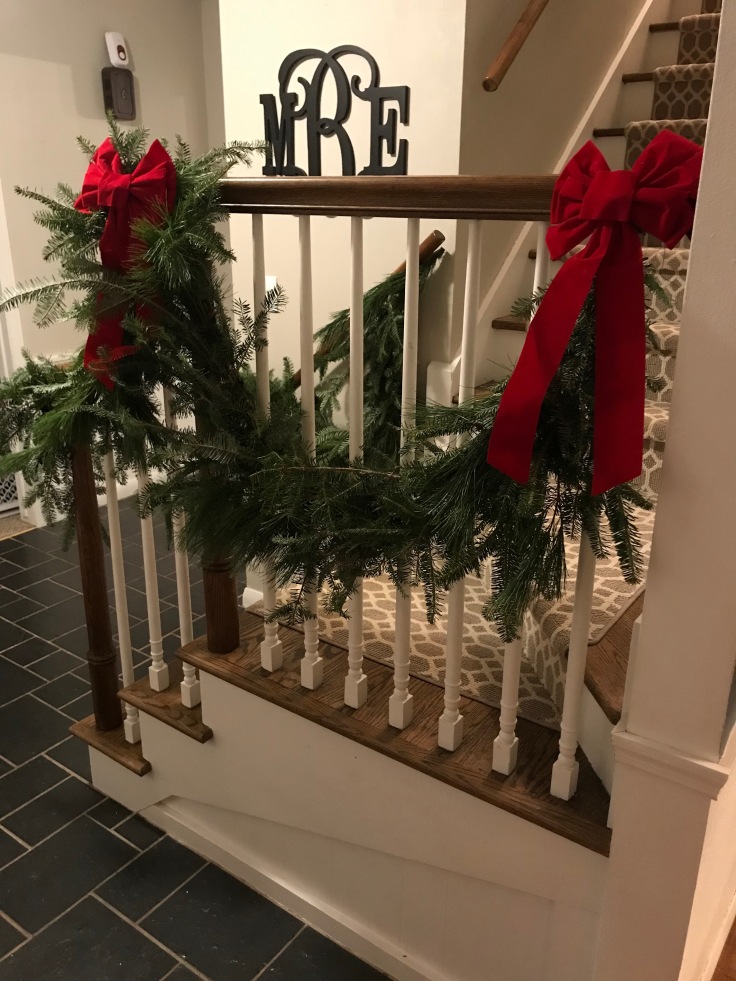 It’s been getting progressively earlier every year, because those of you who know me know I basically turn into Buddy the Elf the day after the kids go back to school. It takes all the self control I have not to decorate for Christmas before Halloween.

I love almost everything about this time of year – the music, the movies, the magic.

This year there’s only one thing I haven’t been loving — It seems like the Christmas season presents a lot of opportunities to directly oppose the things I try to instill in my kids the rest of the year.

Me 335 days a year: Be kind and choose your words very carefully.

Me in December: Let’s sing this super fun song about the Grinch where we call him “an appalling dump heap.”

I’d probably steal someone’s Christmas too if that someone told me my heart was an empty hole, but also that it was a dead tomato splotched with moldy purple spots.

Me 335 days a year: Do not go anywhere with a stranger. Never EVER take or eat anything a stranger tries to give you.

Me in December: Let’s read this magical book about a little boy who is lying in bed one night when a stranger casually pulls up to his house in a freight train. The boy sneaks out of his house, jumps aboard, eats everything thrown at him … and not only does it all work out for him – it works out so well that he gets to meet Santa!

I love me some Polar Express, but let’s talk about how the parents manage to sleep through their kid sneaking onto a freighter. I wake up in a panic when the darkness of my room is disrupted by the silent brake lights of my neighbor pulling in at 9:45. If Tom Hanks showed up in an express train trying to abduct my child, I’d be the first one out the door, and with some choice words for him. The first of which would probably be a request for his autograph.

This one has less to do with my kids, but I also get irrationally angry every time I watch Miracle on 34th Street. Particularly at the part where a single Mom gets a note at 10pm that says “Meet me at St. Francis after midnight mass” on Christmas Eve and somehow makes it there. How did she procure a last minute sitter on the biggest holiday of the year?? Christmas miracle indeed. Also I’d like to know how she can afford a penthouse apartment in NYC on a retail salary, but that’s a different discussion.

Movies aside, the season as a whole continues to usurp all my hard work the rest of the year.

“We need to put healthy foods in our body before we have treats, but here! For the next 30 days start your day with this sugar bomb from your advent calendar.”

“It’s important that you do the right thing even when no one is watching. But also, The Elf is watching! Santa is watching!”

I love the magic of the season, and I love seeing it reflected in my kids eyes … so for the next 30 days I will continue to walk the fine line between enforcing what I usually enforce, and making a few exceptions for the holiday.

In the meantime, my tree will be going up in 48 hours, and I will be sitting in front of it drinking eggnog for the remainder of the weekend. Singing The Grinch.