Lights off, Kids on

This morning Evelyn bucked tradition and watched cartoons on actual TV instead of watching the same Daniel Tiger episode on Netflix for the 62nd time. While I was thrilled not to see that little red hoodie for the first morning in two years, I should have known what was coming. One commercial break alone yielded five additions to her Birthday/Christmas list.

We’ve gotten so used to watching everything on Netflix that until now I’ve managed to exert complete, glorious control over Evelyn’s wish lists.

“You’d probably like some Lincoln Logs from Santa, do you know what those are? No? That’s okay, you’ll love them. We’ll ask Santa.” “How about some new undershirts? Toothpaste? Some new flossers? Ask for some for your birthday.”

For three Birthdays and Christmases in a row my house has been gloriously free of small, junky plastic toys, and holidays have yielded essentials that will actually get used. Like socks. And with excitement! 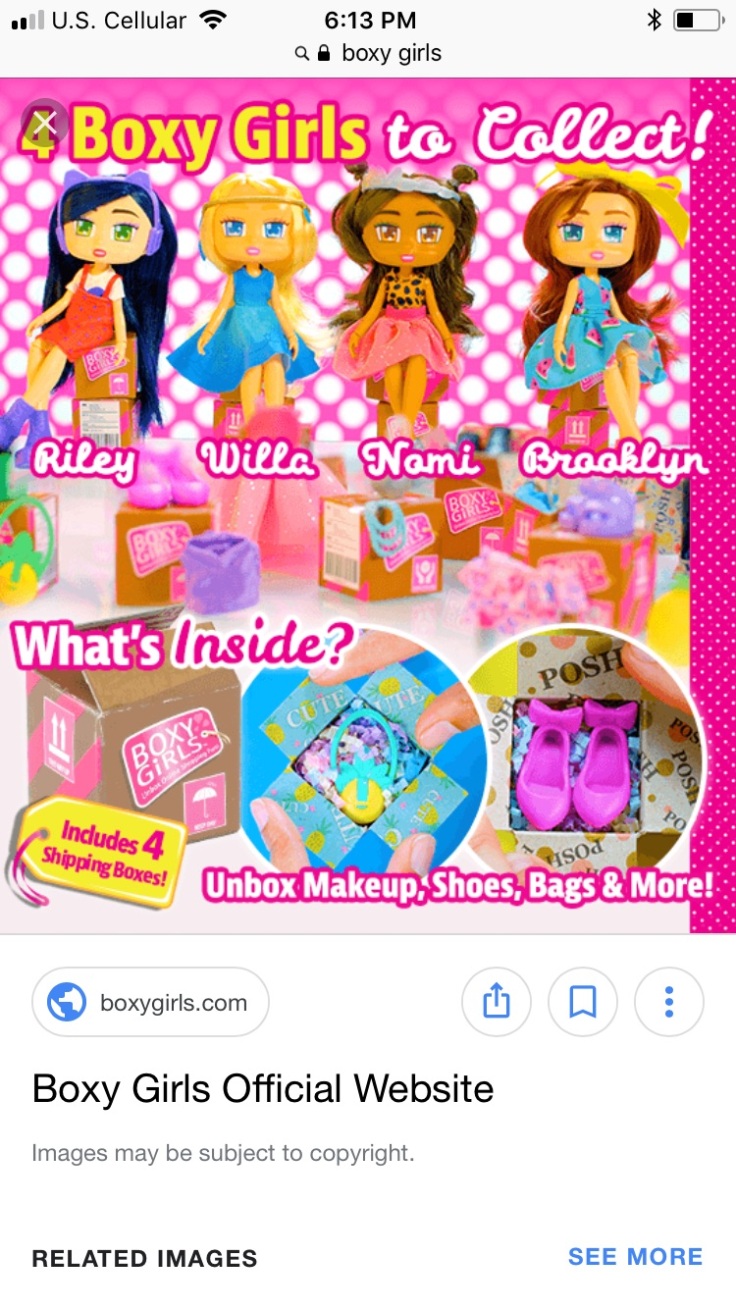 What in the actual hell is a Boxy Girl? I gather they’re pinky-finger-sized versions of my childhood puppy surprise — although instead of a pregnant stuffed dog you’re getting a girl with completely unrealistic bodily dimensions who’s just received mail that you get to open for her. Inside you’ll find a tiny accessory that will get lost, vacuumed or eaten within a half hour. It’s all Evelyn has been able to talk about all day.

That’s it, the beginning of the end of any semblance of organization in the toy room. It’s all downhill from here.

At least I still have my own wish list to control. Last Christmas I asked for a baby, a FitBit, and a full night’s rest. Two out of three ‘aint bad.

I tore open my FitBit and couldn’t wait to start tracking my steps and my sleep. I set my sleep goal to 8 hours a night, and my daily step goal to 10,000 … both clearly realistic goals two days before bringing a newborn home in the middle of winter.

What a fantastic way to add a new level of daily failure to my repertoire. But still I cannot take the thing off — I’m obsessed with achieving that green star they give you when you get 8 hours of sleep or more.

Turns out I can count on one hand the number of nights since December that I’ve met my 8 hour goal — all of them were on vacation, and all of them involved going to bed before 9 pm — including one 7:29 p.m. bedtime, far and away my favorite night of 2018 so far.

For those of you who don’t have a FitBit, either because you don’t want one or because you’re too rich for the FitBit and went with the Apple Watch instead, the different blues  represent different sleep stages — and the red represents time spent awake. 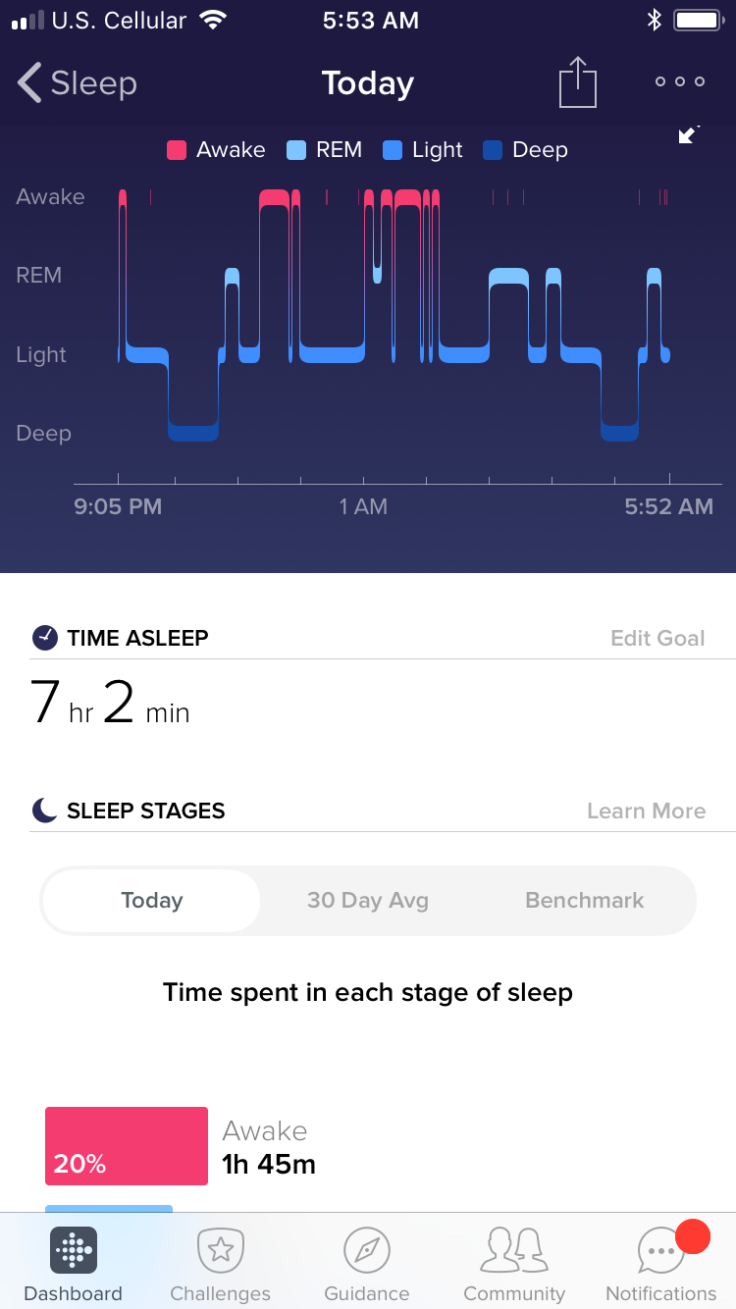 One HOUR and forty five minutes spent awake. And none of this was due to the baby. No, last night’s restful glory was brought to you by WeEnergies and our second power outage in two weeks.

The power goes out and along with it go the nightlights and the sound machines, creating a pitch black, perfectly silent house. Really, creating a perfect sleep environment unless you are under 40″ tall and answer to the name Evelyn or Alex.

You can’t so much as breathe in their rooms without them jumping up at full attention and demanding breakfast.

One of my little light-sleepers is awakened by the most subtle of changes — and it really doesn’t matter which one it is — once they’re up they’re not satisfied until the whole house is awake.

Last night it was Evelyn, who was crying out in terror that she could no longer see the Clark Griswold style spotlight that’s usually shining through her window. In fact, she screamed, she couldn’t see anything, but yet she could somehow see a ladybug in her room and she was not about to sleep in the same room as such a highly poisonous and deadly insect.

Eric finally got her to calm down, but not before she’d woken Alex, who was now demanding that someone remove his sleep sack and get him a glass of water and read him a book and sing him a lullaby and feed him dates and massage his feet while fanning him with palm fronds.

Somehow Lottie slept through it all, which is exactly why she’s my favorite child, and with Evelyn assured that the ladybug was well on its way to exploring our septic tank, we only had Alex to appease before could get back to bed.

Unfortunately Alex had other plans, and so we decided to attempt for the first time bringing him into our bed with us.

Somewhere out there are magical unicorn parents whose magical unicorn kids crawl into bed with them in the middle of the night and actually fall asleep. What kind of sorcery is this? How is it achieved? Are the children misted with Lavender and Benadryl as they walk through the door?

Our kids come into our bed and it’s like social hour at Shady Pines, what with all the yelling and repeating of oneself. Alex was lying there rattling of full sentences with words I didn’t even know he had in his vocabulary.

“It’s nice and toasty warm in here, Mama. Let’s call Grandma, Mama. Tell me all about the Magna Carta Mama.” Telling him to shush fell on deaf ears, and ignoring it just spurred him to repeat himself at an increasing volume until you acknowledged that yes, it was indeed toasty warm in here and that yes, that was my ear his finger was in and that no, I would not be making him pancakes right now.

And then they were all bright-eyed and energetic today while I assumed this position every chance I got. 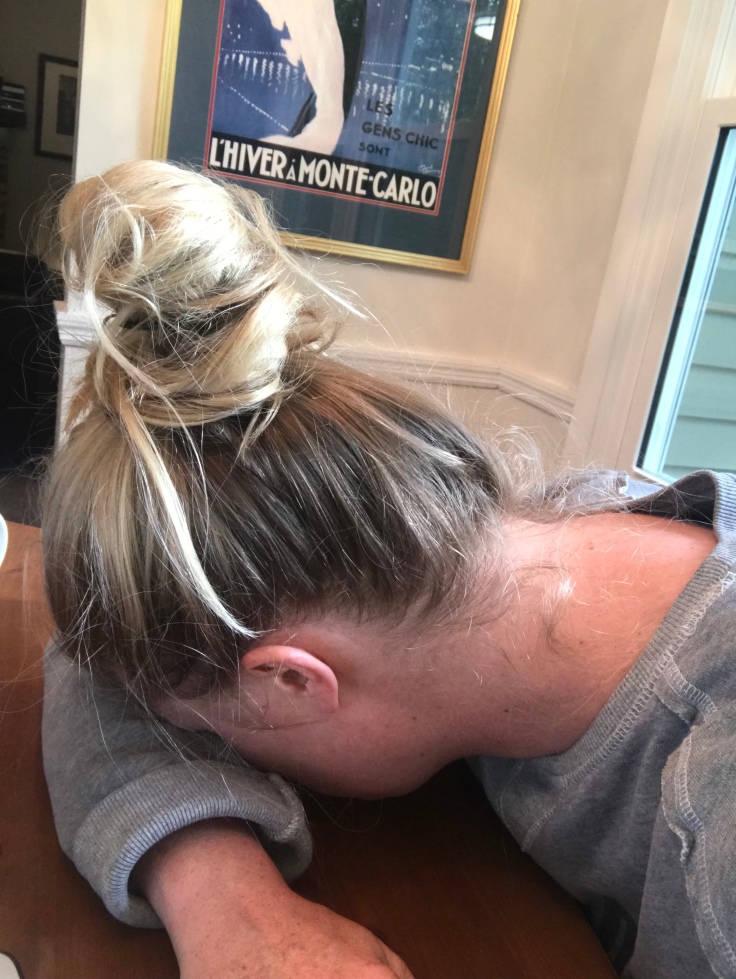 Tomorrow we have a wedding, and I can’t decide if I’m more excited to see one of my very oldest and dearest friends walk down the aisle, or for a hotel room with no children.

The real challenge will be staying up past 7:30, you know so we can eat dinner with the other adults. If we can do that, we can do anything. Except buy Evelyn some Boxy Girls … I’m hoping she’ll forget about that one by October.