I’ve officially been a Mom now for three and a half years. In that time I’ve had three and a half babies. I’m counting Pippa as a half because while I did not carry her, birth her or nurse her (there’s a thought), she can be every bit as demanding as my actual children (see giant pile of puke next to the couch that I walked into this afternoon.)

Though my kids aren’t old enough yet that they know to ask me if I have a favorite child, I can unapologetically tell you that I do. And it’s this one:

Yep, Lottie is my favorite. Today. Yesterday it was Evelyn. Alex had a three day run last week. My favorite child is whichever child is currently being the easiest for me, and it’s my belief that any parent of toddlers who tells you otherwise is either lying or so thoroughly medicated that all her children are surrounded by a rose-colored haze.

I plan on clueing my kids in on this fact as soon as possible, in hopes that if they grow up competitive, they’ll immediately enter into a lifelong competition with each other to be the easiest kid for Mom and Dad, thus securing permanent favorite child status.

Social media has a way of making it look like all of our children are always easy for us, and all-around wonderful, and that they eat vegetables and tofu and curried anything for every meal, and that we have perfect marriages and ride unicorns on the beach in our downtime. Probably because we usually post just this.

Meanwhile behind the scenes you’ve just been in a row with your spouse, so you throw Pop Tarts on the table for the kids, who then get so hopped up on sugar before 7 a.m. that they run full speed at you with their fists blazing and they end up giving you a fat lip to go with your bloodshot eyes. And the closest you’ve been to the beach or a unicorn is the Lisa Frank folder you just pulled out of your daughter’s backpack that contains the snack schedule, reminding you today’s your day to supply a peanut-free/gluten-free/dairy-free/dairy-substitute-free/sugar-free/rice-free/corn-free/color-free/flavor-free/fun-free/easily-chewable/non-stainable/individually-packaged snack, and you’ve completely forgotten.

So, in case I’m guilty of over-posting/over-gramming the wonderful aspects of my kids, here are some of their not-as-wonderful truths to balance everything out.

Lottie. My current favorite. The day she was born I shared a beautiful, filtered image of her that welcomed her to the family. A few hours later my sister called and I answered the phone in tears, asking if it was too late to put her up for adoption, and I was only 95% kidding. Maybe even 90%. Those first few days postpartum were rough — I’d been so excited for the hospital stay as a break from my older two kids that I’d forgotten about the ridiculous round-the-clock cluster feeding of a fussy newborn who is impatient for your milk to come in.

One cute little baby all snuggled up and nursing, and one not-so-cute puke bag to throw up into so I didn’t throw up all over her.

And next to me on my little hospital table:

More puke bags, two Starbucks that I was dying for but couldn’t keep down, a gatorade to wash down the anti-nausea meds, and the stress-gingerbread-boy that had gotten me through labor, passed out facedown on a banana I couldn’t eat. Not very glamorous.

But we got through it, and my crying cluster-feeder became a sweet baby who quickly became my easiest. Until this week, when instead of sleeping in her carseat she decided to hate it. Now she’s the baby that screams unless she is moving, and moving at a certain speed. Which is bad news for everyone else because she basically lives in her carseat on Monday and Tuesday. It also means that my tolerance for slow, elderly and/or indecisive drivers has plummeted, which rules out any grocery store parking lot between the hours of 10 a.m. and 2, and The Dollar Store parking lot at all times,

Now Alex. My sweet smiley boy who we call The Ambassador because he has a smile and a “Hi!” for everyone he sees.

He also whines for 86% of his waking hours and screams for 45 minutes when goes to bed. He currently refuses all food that isn’t a Brach’s Jelly Bird Egg, so he eats an average of one meal a week when he finally gets hungry enough, and acts like a jerk the rest of the week because his tummy hurts and he can’t figure out why. And he’s a lot like a dog in that he always wants to be on the other side of the door, then as soon as he is he changes his mind and wants to go back. Even if that “door” is time out:

Please excuse A) the state of my floors (this was about a week before I had Lottie and I was completely over wiping up paw prints.) and B) the state of our deck — it had just been ripped up so they could fill in the old septic tank. And by “Just”, I mean the previous September. We should get around to finishing it by this summer. And by “We” I mean my super-handy husband, Father-in-law and Dad. I helped for an afternoon and have now been promoted to supervisor.

And then there’s Evie, my sweet Evie. She’s truly delightful, until she ingests a single grain of sugar or is the slightest bit overtired, at which point her personality is best explained by this picture:

She’s the one I was thinking of when I mentioned a kid running at you fists blazing. Fatigue and/or sugar turns the girl into an absolute maniac, which is why I’ve been known to put her to bed for the night at 4:30 and also why we still haven’t finished her Valentines Day candy from 2016.

Then there are moments when they’re all my least favorite:

I shot this video as a Public Service Announcement — and its message is to anyone considering multiple children — don’t … don’t do it until you can hire someone else to take them to the doctor for you. 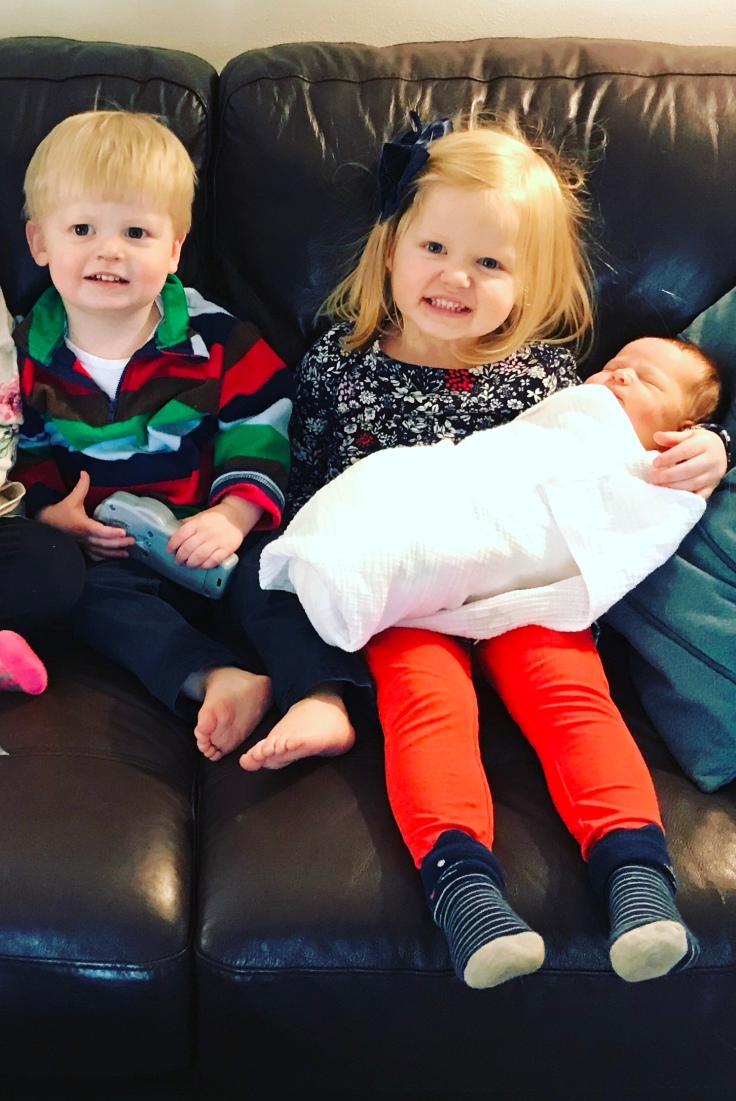 So you see it all evens out. And speaking of evening out, never forget that for every nice, happy, sunshiny picture I post, I’m probably sitting at the computer with a fresh black eye from a toddler head butt and I’m only posting it because it’s the one day this week that my kids have been in real clothes and hell, I’m proud of that.