Something Mold, Something Goo…

This stage of life comes with many projects that I can never seem to see through to completion. Laundry is one of them. I haven’t seen the bottom of our hamper in over a year. Shaving’s another. My rushed showers seem to always allow time for my right leg, but my left has remained half-shaved since Easter, give or take. You’d think I’d learn to rotate my starting leg, but my brain is definitely not functioning at full capacity. As evidenced by the fact that I put Desitin on my toothbrush last week.

The interior of my car is another. I just can. not. keep. it. clean. It also represents most if not all of my former “I will never’s”. “I will never let my car look like a hoarder drives it,” I said. As I write this there are two strollers, two pack n plays, three carseats, 12 baby toys and 29 changes of clothes in there.

“I will never let my kids eat in the car,” I said. See that (those) stain (stains) on Evelyn’s carseat? Know what that is? 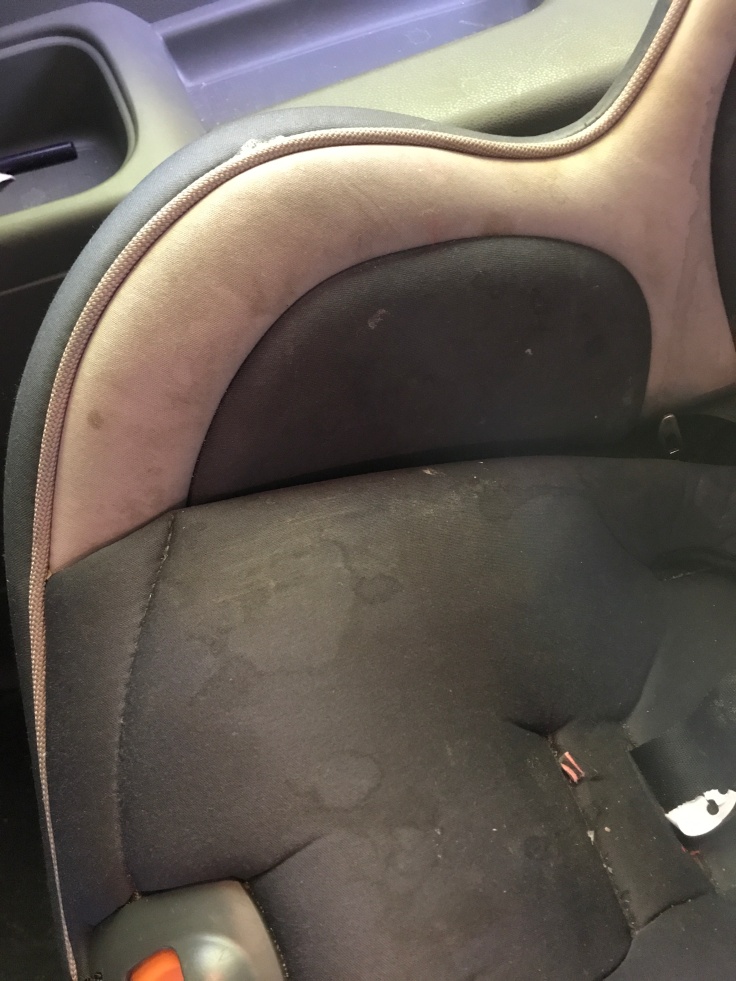 Neither do I. But today on the way home from school I heard her exclaim “Hey, a french fry!” and looked back just in time to see her pop it into her mouth, so it’s a safe assumption that those stains are from one of the many car meals during which that french fry was discarded. Judging by the crunch, it’s been at least a month.

The strollers are no better. Today Alex was eating Craisins and Clementines and dumped them all out. As I was reaching behind him to retrieve them, I also pulled out these withered, soggy apples. 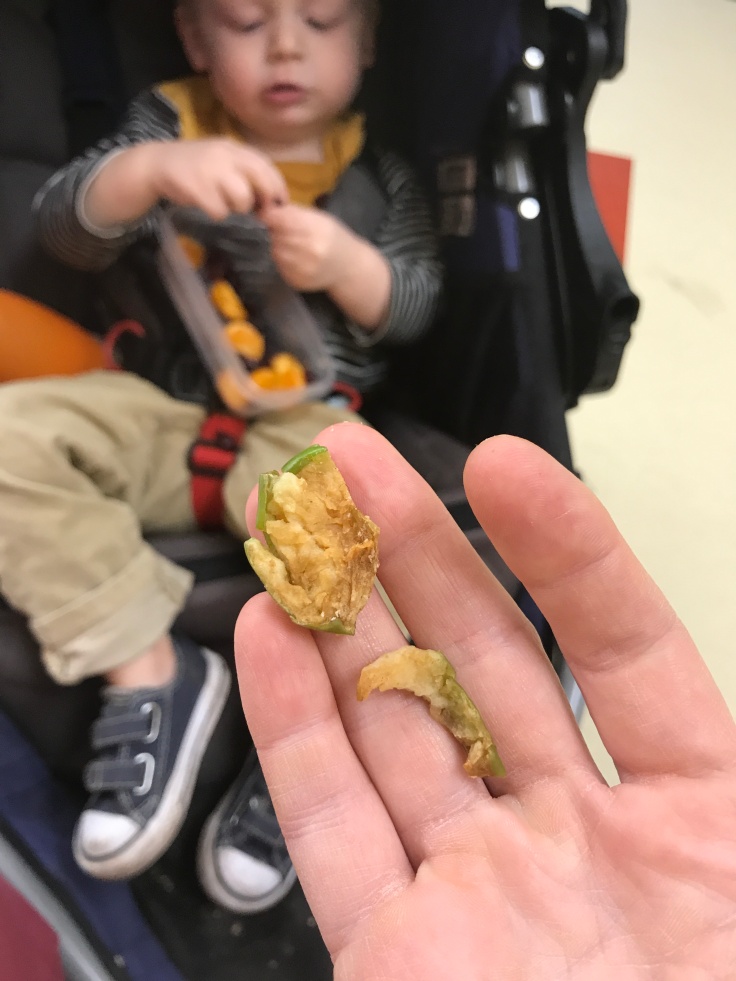 The last time I used this stroller was Monday, and I cleaned it out that night, so I can only assume that Alex has fashioned a secret pocket to squirrel away his snacks until they’re good and rancid. He must be part of a toddler competition to see who can eat the grossest food without puking all over his crib.

I’d like to tell you that’s the worst thing he eats, but I’d be lying.

See that hairbrush lying on the floor? That hairbrush represents a new low in parenting, one that I achieved only this morning.

I should preface this by explaining that Alex eats hair.

From the day he figured out his pincer grasp, he’s delighted in nothing quite as much as he does plucking out my hair one strand at a time and putting in his mouth before I can wrangle it away from him. I think he’s trying to floss.

This used to gross me out. Then one day we were at the library and he walked over with someone else’s hair hanging out of his mouth. From that day on, my hair has been just fine. Still, I’ve always at least attempted to get it back out of his mouth once it goes in.

The half-hour leading up to our departure for school this morning was one of the whiniest, screamiest I’ve endured. For thirty minutes I oscilated between plugging my ears and considering cutting them off with one of the knives I was unloading from the dishwasher for the third time in 24 hours.

Suddenly, there was silence. Glorious, deafening silence. I enjoyed it for a full 12 seconds before panic set in, and ran to the last place I’d seen Alex heading, which was the bathroom. Has he fallen into the toilet headfirst? I wondered. Has he stuffed his mouth so full of toilet paper that he can’t breathe? Opened the window and made a run for it?

Not to worry. What he’d done was find a hairbrush, and what he was doing was slowly pulling the hair out of it and eating it strand by strand. Did I stop him? Nope. Did I let him carry it to the car with him and continue for the whole drive? You betcha.

Evelyn was quiet too, thanks to my recent discovery of letting her color in the car.

This is what her seat looks like when she gets out. Sometimes there’s a melted crayon stuck to her butt, and sometimes I don’t notice until an hour later, and sometimes even then I don’t make a move to remove it.

Also, see how all the wrappers are peeled off? Another of my “I will never’s” that I abandoned long ago.

On Friday mornings I have two hours with no kids. Every single time, before I go anywhere else, I go to the gas station and vacuum the s••• out of my car and their carseats. By Saturday afternoon, this is how it looks.

It’s almost not worth it. And yet, for that remaining hour and fifty minutes, I get to drive to wherever I’m going and not feel like a hoarder … not feel like there are probably rats living in my car that will be scurrying out from under the seats at any moment. I get to feel like a slightly better parent because I know that at least for today, my kids will not be reaching into their carseat and pulling out a week-old chicken nugget and eating it like a piece of jerky. That’s just for Thursdays.