Last Sunday night I put some chicken in the fridge to marinate for 12 hours.

Sometime late Thursday afternoon, I remembered it was in there.

This was a moment I probably should have felt bad about, but then again just that morning I’d let Evelyn bring a kazoo along on a car ride I was hoping Alex would sleep through. So it wasn’t the dumbest thing I’d done all day, not by a long shot.

Still, I couldn’t believe my oversight. Not because it was chicken, but because it was Peanut Ginger Chicken. There’s no substance more at risk for immediate consumption in our house than peanut butter. Evelyn’s obsessed, Pippa eats it straight from the jar when I’m not looking, and as for me, well there are no words. I’d eat it in the rain, on a train, on a boat, with a goat, in a box, with a fox, in a house, with a mouse, here or there, anywhere. (Guess which book I’ve read over 75 times this week?) I love me some Dr. Seuss, but the man could have shortened his books by a good 20 pages. They should start selling throat lozenges on the end cap of the Seuss aisle at Barnes and Noble.

But back to Peanut Butter, and all the ways I’d eat it. I’d gotten this recipe on beckyspen.blogspot.com (I’ve also copied it below.) It was to be my first installment in my  goal of trying one new recipe a week.

I set the goal back in June, so I figure I’m right on schedule. (If I could go back in time and give single Melissa one piece of training for Motherhood, I’d have told her to make a list of 10 things that she really really wanted to accomplish every week, hang it where she could see it clearly, and then practice actively ignoring it for the foreseeable future.)

Anyway by the time I remembered I’d started the recipe, I was onto craving noodles. But what makes noodles even better? Peanut Butter. So I decided to make up an extra batch of the peanut sauce/marinade, pour it over some Udon noodles, then top it with the grilled chicken. I plan on using this marinade as a peanut sauce for just about anything you can eat with sauce, and probably even things you can’t, like cold cereal. It’s that good. 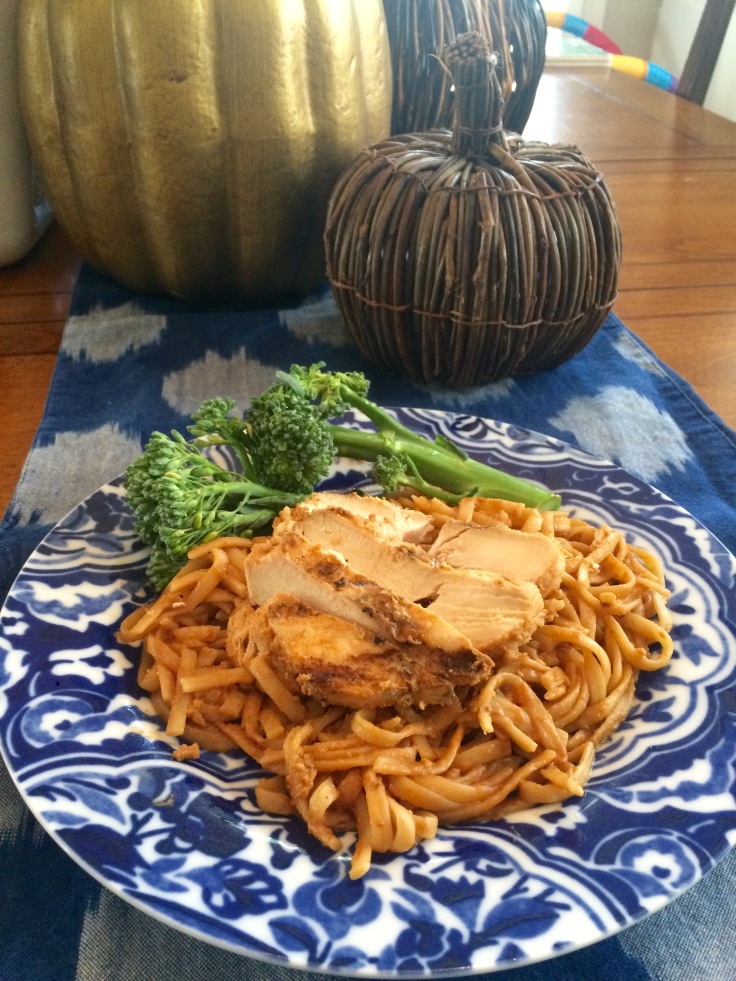 This picture turned out pretty good right? It’s certainly not professional, but it looks appetizing enough. When I told a friend of mine I was starting a blog, she asked if it was a food blog. “You love to bake,” she said, “you’d do great.”

“It would be complete rubbish,” I told her, “for exactly three reasons.”

The first is that the food pictured here is a week old. I made it last Thursday, but I didn’t get around to photographing it for this purpose until a week later when I was eating it as leftovers for lunch.

Second, to really class up the plate I threw a couple of pieces of raw broccoli on there. It’s raw for two reasons. First, I had neither the time nor the inclination to cook it. Our vegetable steamer is logically stored in the very back of the armoire in our living room, right behind the DVDs. I’ve decided not to dig it out until someone gives me the recipe for a steamed meal that can take the rest of this baby weight off in one swift swoop. Second, I wasn’t planning on eating the broccoli anyway. Why would I, when there’s peanut butter flavored food on the plate? I can only assume people come to food blogs looking for recipes, not only for the main dish but for the side dishes, so that’s strike two.

The third reason I could never cut it as a food blogger, and this is the real clincher, is this:  I walked back into the kitchen to grab some cilantro for the garnish, and when I came back, this was happening:

If there’s ever been a clear glimpse into my daily life, this is it. The one meal I’ve prepared for myself is being eaten by someone else, there’s a whopping pile of laundry waiting to be folded, there’s a jumparoo in my dining room, and I have my phone in one hand and a vegetable in the other that’s about to be traded in for a PBJ.

So there you have it. One of the many reasons I’ll have to stick to blogging about my kids and not my food. But this recipe rocks, and it’s clearly Pippa approved, so here it is! And check out Becky’s blog — there are some other delicious looking recipes on there. The Mandarin Salad is my new recipe to try for next week, so I should get around to actually making it sometime in early 2017.

In a mixing bowl, gradually stir hot water into peanut butter. Stir in rest of ingredients. Place the marinade in a large Ziploc bag. Add chicken and chill for 12-24 hours. (Or if you’re me, 48+ hours will also do.) Remove chicken from bag and grill or broil 15-20 minutes until done.

*Delicious over Udon noodles with the same sauce — you could probably split the marinade in half before marinating the chicken, but it was just as easy (and extra delicious) to make up another batch of the marinade just for the noodles.